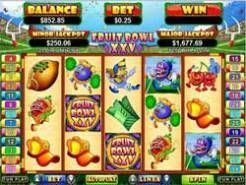 Play Now
Imagination is a wonderful thing but thanks to this colorful slots game players don't have to imagine too much, instead they can live through a super bowl game that instead of having real players is actually played with juicy fruits. The Fruit Bowl XXV slots game is colorful and fun with its five reels and twenty five paylines, filled with juicy looking fruits that are playing the All American football game. Players are able to try out the game for fun before placing real money bets and when the player is ready it is easy to switch to the real money game. This colorful slots game also includes two random progressive jackpots that may be won at any time when playing the real money version of the game. Both the minor and major jackpots increase in value with every real money bet that is placed.

Wild But Not Squashed Grapes

How to Earn Free Spins with a Win Win Feature

The logo of the game is a scatter symbol and it acts as a traditional scatter in that it awards players multiplying payouts and is also a key player for the free spins bonus games. Five of the scatter logos awards the player 200x the coin bet placed, four awards the player 20x the coin bet placed and three awards the player 3x the coin bet placed. Three and more of the logos on screen triggers the bonus game. Players are taken to a clear field where they are invited to kick the ball. Depending on the strength of the shot, the player can win up to 25 free spins during which the multiplier can also be up to 25x. The appearance of two and more of the scatters on screen will reward the player with a further five free spins. And in addition there is a win win feature that is activated if the player wins between 0-10x his bet placed, if this is the case the player can win between 5x-250x the bet. All of this is in addition to the random progressive jackpots that can be won at any time and the general fun and laughter that this game provides for each player.
Play Now