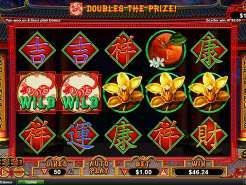 Play Now
The Dog is the eleventh sign of the zodiac and it is time for the dog to be the central zodiac icon as the Chinese New Year approaches. This slots game with its five reels and twenty paylines is a game of Chinese culture, it is filled with zodiac signs and Chinese symbols. Players may try out this game for fun and practice before placing real money bets. There is also an auto play feature for players that want to preset the number of spins the game runs for consecutively.

Look Out for the Zodiac