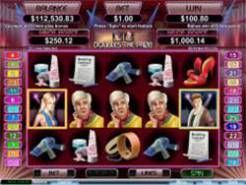 Play Now
Everyone has a part in fashion whether they realize it or not. There is fashion in clothes and there is fashion in the way we walk,what we eat and more. This five reel twenty five payline slots game deals with the high fashion world of models and runways, fancy shoes, lipsticks, hairdryers, cameras and more. There are two random progressive jackpots in this game that can be won at any time when playing the real money version of the game. The minor and the major jackpots increase in value with every real money bet that is placed when playing this High Fashion slots game.

The male and female models are the wild symbols in this game. They appear either on reel 1 or 5 where they can substitute for other symbols and complete winning payouts. When the male model and the female model appear on both 1 and 5 at the same time the player is treated to 5 free spins with an expanded model appearing on reel 1 or 5 or even both reels for the duration of the free spins. With the appearance of more models on 1 and 5 the player benefits from an extra free spin.

Runaway with the Runway