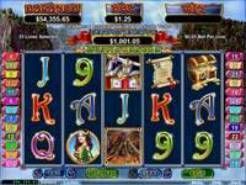 Play Now
Imaginations can run wild with this colorful slots game that takes players into the world of dragons and witches and warlocks. Players will need a certain amount of imagination to be able to enjoy this game that is filled with action and also gives the player a chance to win a random progressive jackpot. The random progressive jackpot can be won at any time when playing the real money version of the game and the more players that enjoy the game the greater the jackpot grows and hopefully the more chances the player has of winning it. There is an auto play feature for players that want to preset the number of spins the game runs for consecutively and this can be set with the option of stopping it at any time.

There is a wild symbol and a scatter symbol in this game that add to the winning options offered. Players can win payouts for landing two or more of the same symbols next to each other on an active payline. The dragon symbol is wild and it appears on reels 2,3 and 4 . When it does appear on the these reels it can substitute for other symbols and help to complete a winning payline. The wild also doubles winnings that it helps to complete. The volcano is the scatter symbol awarding players multiplying payouts.Five of the volcanoes on the screen award the player 500x the coin bet placed, four award the player 10x and three awards the player 2x the coin bet placed. Three and more of the volcanoes also awards the player free spins, the player can win up to 100 free spins during which all winnings are doubled. Imagination may run wild in this game but the winnings are real and rewarding.
Play Now