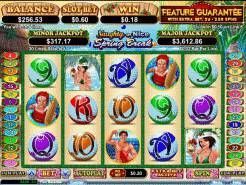 Play Now
Santa is out of everyone's minds in this sequel game where the Naughty and Nice girls are visiting the shores of Florida for their Spring break. Players will enjoy the colorful nature of the symbols and background in this five reel thirty payline slots game that also includes two random progressive jackpots. Both the minor and the major jackpots can be won at any time when playing the real money version of the game. There is also an auto play feature for players that like to preset the number of spins the game runs for consecutively and at any time the player can stop this and revert to manually hitting the spin button.

Two Wilds and One Trigger for Bonus Game Choices

The Benefits of the Nice Girl

Choosing the Nice bonus feature will reward the player with 12 free spins during which all winnings are doubled when the Nice girl appears and the player can benefit from a further bonus by clicking on one of the Nice girls. The further bonus will give the player either an extra multiplier, a grouped wild or a bonus of up to 500x the triggering bet. In addition to these bonus games there is also a bonus feature guarantee that ensures the player will trigger the feature between 50-250 spins but if the player place an additional initial bet he can choose the instant trigger that will give him the feature between 26-250 spins. And of course there are still the two random progressive jackpots that can be won at any time when playing the real money version of the game.
Play Now