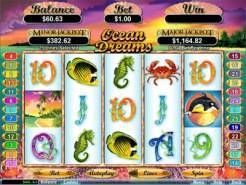 Play Now
Ocean Dreams slots is a magical slots game that takes players to dessert islands where they can enjoy the colorful sunsets and the majestic views that surround the island as they see the starfish appearing on the shores and the orca whales jumping the waves. There are five reels and twenty five paylines in this game that can be tried out for fun before placing real money bets and also offers players an auto play feature. The auto play feature allows the player to preset the number of spins the game runs for consecutively. At any time the player can stop the auto play and revert to spinning the reels manually giving him a feeling of being part of the game naturally.

Free Spins with Lots of Extras

The scatter symbol is the island and this is a multiplying symbol that awards up to 500x the coin bet placed when five appear on an active payline. Four award the player 20x the coin bet placed and three awards the player 3x the coin bet placed. Three and more of the islands on screen awards the player free spins during which all winnings are doubled and the orca is golden on all reels. Three of the island symbols reward players with 10 free spins, four reward players with 25 free spins and five reward players with 100 free spins. The free spins can be triggered again and the gold orca appearing in multiples on active paylines quadruples winnings as a result of the 2x bonus for free spins and the extra 2x bonus for the golden orca. This game is majestic in its beauty and also very enjoyable with lots of potential to win and of course the two random progressive jackpots that can be won at any time in the real money game.
Play Now