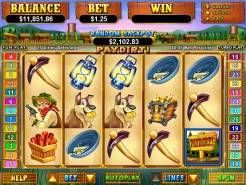 Play Now
Everyone wants some gold, it is one of the most sought after metals in the world that has always kept its value. Earning gold is hard but mining for gold is where the real treasures come from and this five reel twenty five payline slots game gives players a little bit of comical fun as they join the original gold miners on their journey to find gold. The symbols in this game that includes a random progressive jackpot include miners, dogs, donkeys, dynamite, mine sifters and more. Players can try out the game but should remember that this is only the fun mode and players won actually win anything, the real fun and Adrenalin rush comes from placing real money bets. For players that like to enjoy the game from more of a distance there is an auto play feature that allows the player to preset the number of spins the game runs for consecutively and at any point the player can stop the auto play and revert to manually hitting the spin button.

Three and more of the scatters on the screen also triggers the bonus feature game in which players are invited to choose one out of three mine icons. The player will either win the gold rush bonus, the gold fever bonus or the strike it lucky bonus. The gold rush bonus awards players 12 free spins during which all wilds that appear are grouped. The player can also trigger this feature again with the appearance of more scatters. The gold fever bonus game awards the player with 5 free spins during which reel 3 is filled with gold wild nuggets for the duration of the free spins. These can also be re-triggered. And the strike it lucky bonus game is awards the player a choice oout of five gold mines. The choice will reward the player with a bonus payout and 10 free spins during which all bonus symbols become wild nuggets. This too can be triggered again and it must be remembered that with these bonus games players can also win the random progressive jackpot at any time adding to the excitement of the mining wonder game.
Play Now