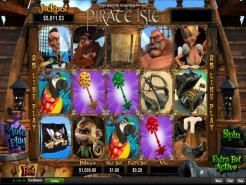 Play Now
Who wouldn’t want to find some hidden treasure, well in this game it is imminently possible when joining the band of pirates in their search on the high seas and through Pirate Isle for hidden treasure. There are five reels and twenty-five paylines in this slots game that also includes a progressive jackpot. The progressive jackpot increases in value with every real money bet that is placed, and it is won at the end of one of the bonus features. Players in this game can opt for the auto play that allows them to preset the number of spins the game runs for consecutively. The auto play can be stopped at any time and the player can continue with manually hitting the bet button.

Wild Skeleton Keys that May or May Not Open Treasure Chests

The skeleton key is wild, and it can substitute for any of the other symbols on the screen. When appearing on reel 3 it is grouped giving players more winning opportunities. On all the reels where the wild skeleton key is used to make up a winning payline, the winnings are doubled. There are two scatters in this game that award the players multiplying payouts, both the Galleon ship and the treasure chest are scatters and trigger bonus games when three or more appear on the screen.

Head for the Galleon and the Progressive Jackpot

Three and more of the galleon symbols awards the player an entry to the special Broadside game where the player is in exchange with an enemy and battles his way up a ladder on the broadside of the boat to try and reach the top. Each step on the ladder awards the player more free spins and brings him a step closer to the progressive jackpot that is won when reaching the very top of the ladder. Pirates are not all bad as players will soon learn when enjoying their visit to the Pirate Isle.
Play Now