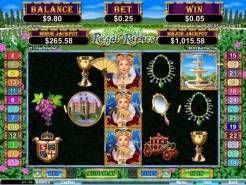 Play Now
Regal Riches slots is a game of pomp and circumstance set in the country home of the queen where beautiful gardens are filled with stunning flowers, fountains and the queen herself strolling around. There are five reels and twenty five paylines in this regal slots game that includes two random progressive jackpots. Both the major and the minor jackpots increase in value with every real money bet that is placed and the player can win either of these at any time when playing the real money version of the game. There is also an auto play feature for players that like to preset the number of spins that the game runs for consecutively, the auto play feature can be stopped at any time and the player can change back to manually hitting the spin button.

Queen Elizabeth and Her Fountains