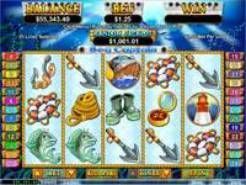 Play Now
Some people just can't stay away from the sea, they love everything about it, the deep blue waters, the fish that swim, the salty taste and more. This five reel twenty five payline game centers on someone who lives for the sea and makes his livelihood from everything to do with the sea. The Sea Captain slots game is all about the captain of a fishing boat who spends his time on the high seas where he fishes and enjoys the sea breeze and fresh air of the ocean. There is a wild symbol and a scatter in this game that also includes a random progressive jackpot. The random progressive jackpot can be won at any time when playing the real money version of the game. The more players that place bets on this game the greater the jackpot grows and the more exciting it becomes for the player.

The orange squid, one of the inhabitants of the ocean is the wild symbol in this game that when appearing can substitute for other symbols and make up a winning payline. The squid only appears on reels 2 and 4 but when it does appear on these reels it can substitute for other symbols and in this way complete a winning payline. The captain in his waterproof clothing is the scatter symbol awarding player multiplying payouts. Three and more of the sea captain on the screen awards the player 7 free spins during which all winnings are tripled. With the appearance of every extra sea captain on the screen during the free spins, the player earns an extra free spin. And it must not be forgotten that at any time the player can also win the progressive jackpot when enjoying the anchors, boots, lighthouses and other symbols that spin around the reels.
Play Now