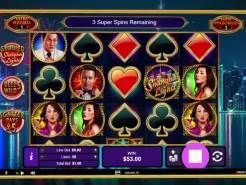 Play Now
Shanghai is a city that never sleeps. It is a city of fun and laughter, shopping and lots of nightclubs with music, dancing and more. This slots game is a tribute to the many different nightclubs and bars that can be found in the city of Shanghai. Players can try out this game for fun before placing real money bets. There is an auto play option for players that want to preset the number of spins the game runs for consecutively. This game is filled with action with its five reels and fifty paylines.