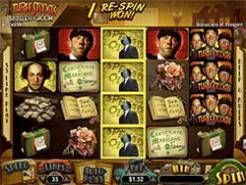 Play Now
The Three Stooges Larry, Shemp and Moe were made famous in the comical movie of 1947. In the movie the three stooges were seen getting up to lots of trouble and strife including trying to marry off each other. This slots game with its five reels and thirty-three paylines is a take off from that move and even treats players to a few clips from the movie when logging on to the slots game for the first time. After trying out the game for fun if the player feels the need, he can also choose the auto play that allows him to preset the number of spins the game runs for consecutively.

If wilds appear on all of the three middle reels or any of the stooges the player is treated to between 1 and 3 re-spins and he may be lucky enough to trigger further re-spins. The three stooges or wilds covering all the positions on reels 2, 3 and 4 rewards the player with picks. During the picks the player can win either whacky wilds, free spins or an increased multiplier. Players are awarded either 9 or 33 free spins during which all winnings are tripled. This crazy slots game is reflected in all the whacky payouts and winning options that players are eligible to win.
Play Now