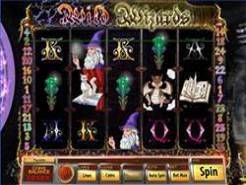 Play Now
Wild wizards are not so crazy, they are powerful and they can help the good and the bad in everyone. It is important to know which side the wizard is on before joining his team and asking him for favors. Luckily in this five reel twenty five payline slots game the wizard is just a character in the game and his influences are only for the good of the game and the winning payouts that players can earn. There is an auto play feature for players that want to preset the number of spins the game runs for consecutively. The auto play feature can be stopped at any time and the player can continue with manually hitting the spin button whenever he places a bet.

In this game the Wizard with his purple hat is the wild symbol and he appears on all the reels where he does the job of substituting for other symbols and helping to complete winning paylines. Five of the wizards award the player the highest payout of 1000 coins. The scatter symbol is the ever watchful owl that gives players multiplying payouts.

Cats are Lucky and Generous

There is an additional bonus symbol, the cat. Three and more of the cat symbols on the screen triggers the bonus game. Players are awarded 10,15 or 20 free spins during which all winnings are tripled. The player may be lucky enough to trigger further free spins and these are added to the existing amounts. Magic spells and wizardry can work to the advantage of the player as shown in this colorful and simple slots game.
Play Now