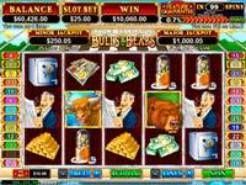 Play Now
The Bulls and the Bears in this slots game that has five reels and twenty five paylines are not cute and cuddly animals as one likes to think but rather play the part of cut throat traders that spend most of their days on the floor of the stock exchange where they buy and sell in order to make their millions. This slots game with its two random progressive jackpots that can be won at any time when playing the real money version of the game is fast paced and exciting with the opportunity for players to trade when they win free spins.

Trading with the Bull and Bear

Both the Bull and the Bear are wild symbols in this game and when appearing on active paylines they can complete the line by substituting for other symbols. The Bull in an active payline will double the winnings earned and the Bear in an active payline multiplies the winnings 4x. The chart of the activities of the trading is the scatter symbol and this activates the bonus free spins game when three or more appear on the screen. Three of the charts awards the player 5 free spins, four awards the player 7 free spins and five awards the player 15 free spins. Before starting the free spins the player is taken to the trading floor where he is invited to choose either the Bull or the Bear as his trading partner. Choosing the bull will enable him to earn an extra spin every time a bull appears during the free spins and choosing the bear will enable him to sell by receiving an extra free spin also. The buy sell feature adds another element of fun to this game that is already filled with lots of opportunities including the two random progressive jackpots.
Play Now