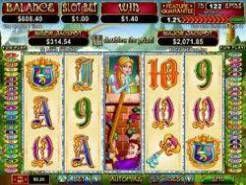 Play Now
Based on the fairy tale legend of Rapunzel and her prince that saved her from the locked tower, this five reel fifty payline slots game oozes love, romance and magical stories within its reels that also include two random progressive jackpots and a special feature win guarantee. Players should take a few moments to look at all of the features of the game before starting to play since there is a lot going on and a lot to enjoy.

The Wild Princess Locked in a Reel Tower