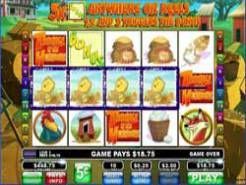 Play Now
The hens are not the only animals that live on the farm as is seen in this colorful visit to the local farm where the farmer is seen along with his boots, some hay, some pigs and other useful tools used on the farm. There are five reels and twenty five paylines in this game that also includes two random progressive jackpots. Both the minor and the major jackpots can be won at any time when playing the real money version of the game. Both jackpots increase in value with every real money bet that is placed.

The hens all comfortable in their little hen house are the wild symbols that substitute for other symbols and help to complete a winning payline. The hens only appear on reels 2, 3 and 4. The egg is the scatter symbol and this awards players multiplying payouts when three or more appear on the screen. Three of the eggs award the player 2x the coin bet placed, four awards the player 20x and five awards the player 200x the coin bet placed. Three and more of the eggs triggers the bonus pick feature game. Players are invited to pick eggs that will reveal a three round bonus game. The first round awards the player 5 free spins if good eggs are chosen, a rotten egg will end the bonus game with just 5 free spins and a golden egg will reward the player with an entry to the second round. In the second round every normal egg will award an extra free spin and if the player is lucky enough to choose a golden egg he moves to the third round where he benefits from an extra bonus or wild symbol per free spin. And during these free spins or during the base game the player can still be eligible to win one of the random progressive jackpots on his visit to the farm.
Play Now