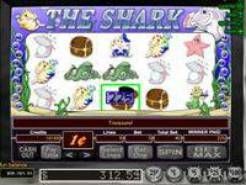 Play Now
Sharks have a bad name for themselves they are thought of as fierce and not very nice but in this game player see a different kind of shark. Not only is he cute but he also seems to be quite friendly not always killing everything that he sees in sight. There are five reels and nine paylines in this slots game that also includes a progressive jackpot. The more real money bets that are placed the greater the random progressive jackpot grows and the more potential winnings the player can earn. Five of the starfish symbols on the screen wins the player the progressive jackpot as long as he is playing the real money version of the game.

Other symbols in the game include a treasure chest, sharks, starfish, octopus and pearls. Three and more of the treasure chest symbols on the screen will reveal an opening treasure chest that will award the player a payout of up to 495 coins per chest. Three and more of the shark symbols on the screen triggers a cute bonus gamble game. This takes place on a new screen where the player is invited to choose a card out of a choice of three faced down cards, in the hope that one of them will reveal a higher card than that of the shark. If the players card is higher then he wins the round and doubles his payout, if the sharks card is higher the player loses his winnings for that round and he is taken back to the main screen to continue playing the base game. The bonus game can continue for as long as the player wins or until he reaches his gamble limit. Sharks are not as scary as they first seem as is proven in this cute animated slots game.
Play Now