Spirit of the Inca Slots 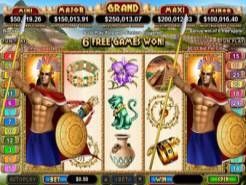 Play Now
The Inca were an incredible people who loved their life and world but also worshiped idols and priests and priestesses. They were a very spiritual people who were religious in their own special way. This five reel twenty five payline slots game with all its magic and mystery infuses beliefs in every player. There are five random progressive jackpots in this game that can be won at any time when playing the real money game and placing a maximum coin bet. The jackpots that are open to the player depends on the number of coins that he bets per line and not on the size. Each bet that is placed contributes a small portion to the random progressive jackpots and each jackpot has to be won when reaching a certain level adding to the excitement and anticipation of playing this game.

In this game there are many colorful symbols with each one offering winning payouts. The Incan spirit and the priestess are considered the most important symbols awarding the player an entry to the bonus payouts and games. The Incan Spirit is wild and can take the place of any of the other symbols to make a winning payout. The Incan Spirit expands when appearing on an active payline. On its own the Spirit awards players some amazing payouts amounting to 2000 coins when five appear on an active payline. Four of the Incan Spirits award the player 500 coins and three award the player 100 coins, two also award the player; 10 coins. The scatter symbol is the priestess who is regal in her appearance on the screen. She awards players multiplying payouts of up to 100x the coin bet placed when five appear on the screen. The Incan Spirit on reels 1 and 5 awards the player an entry to the bonus feature. Players are invited to choose five of the Incan Spirit warriors out of a choice of fifteen. The first three choices will reveal numbers that add up to the amount of free spins the player wins , the fourth choice awards the player a multiplier of between 1x to 10x for the duration of th free spins and the fifth choice reveals either no bonus, an extra wild on each reel or a full wild reel. The player can initially win up to 25 free spins with a chance to trigger 10 more free spins. During the free spins and all of the standard spins the player is also eligible to win one or more of the random progressive jackpots.
Play Now