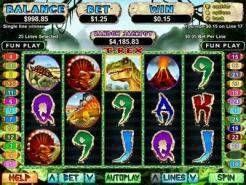 Play Now
T-Rex was one of the loved and fierce dinosaurs of his time, he lived peacefully alongside many other dinosaurs including stegosaurus and other huge dinosaurs. This slots game takes players back to the forests and green lands where the dinosaurs lived. There are five reels and twenty five paylines in this game that also includes a random progressive jackpot. The random progressive jackpot can strike at any time when playing the real money version of the game giving players a huge bonus payout. The more players that place real money bets the greater the jackpot grows and the more exciting the potential win can be for players.

The Greedy Yet Rewarding T-Rex and Eggsciting Free Spins

In this game T-Rex is wild and he can substitute for other symbols in the game and make up a winning payline. In the base game T-Rex only appears on reel 3. On his own T-Rex is a huge paying symbol in this game giving players 10000 coins when five appear on the screen, four awards the player 2500 coins and three awards the player 250 coins. The egg is the scatter symbol and this awards players multiplying payouts and also the trigger for the feature game. Three and more of the eggs on screen triggers the feature game. In the feature game players are invited to pick one of the eggs that will reveal up to 10 free spins. The number of eggs that the player can pick depends on the number of triggering eggs. During the free spins T-Rex appearing on reel 3 will eat all the other symbols on the reel and turn them into T-Rex symbols giving the player more winnings to enjoy. And at any time the random progressive jackpot can be won giving the player even more excitement to look forward to.
Play Now