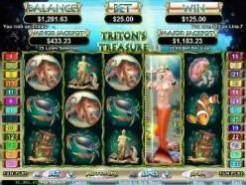 Play Now
Many people are not aware of the underwater world that exists in the five main oceans of the world. Each ocean is ruled by a different King and his crew of mermaids. In this five reel twenty five payline slots game we meet King Triton and his band of mermaids who sit under the seas and keep it calm but cause a storm when the need arises. Players can try out this game for fun but will not win any money and also not have a chance at winning the two random progressive jackpots that are also part of this exciting underwater themed slots game. Both the minor and the major jackpots increase in value with every real money bet that is placed and can be won at any time when playing the real money version of the game.

The Wild King Triton and his Rewarding Mermaid

King Triton is the wild symbol and he appears on reels 2, 3 and 4 in an expanded form where he can substitute for other symbols and complete a winning payout in this way. As a wild symbol he does not pay out anything on his own. The scatter symbol is the red clad mermaid who appears on all the reels and offers multiplying payouts of up to 100x the coin bet placed when five appear on the screen together. Three and more of the mermaids gives the player an initial 5 free spins with a 1x multiplier. More mermaids appearing gives the player bonus picks that can increase the number of free spins or the multiplier according to the players choice. Triton's Treasure is colorful, simple and lots of fun to play with its underwater theme and characters.
Play Now