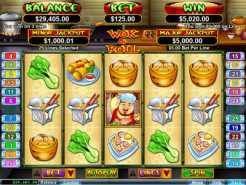 Play Now
Hunger is a feeling of the past when playing this colorful slots game that includes two random progressive jackpots and two different bonus games. Players can try out this five reel twenty five payline slots game before placing real money bets but of course will not actually win anything when playing the fun mode. For players that want to sit and watch the colorful reels rather than pressing the spin button each time there is an auto play feature that allows the player to preset the number of spins the game runs for, this can be stopped at any time and the player can continue manually hitting the spin button.

Delicious Food Made by the Chef that Also Substitutes

The wok and roll symbol is the scatter and this awards players 8 free spins when three and more appear on the screen. During the free spins the player benefits from a random multiplier of between 2x - 10x that appears after each spin at the top of the reels. The scatter on its own awards players multiplying payouts of up to 200x the coin bet placed when five appear on the screen. During regular game play and during the free spins bonus games players can still win the random progressive jackpots at any time.
Play Now