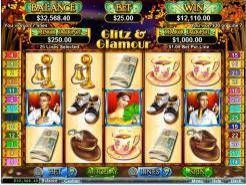 Play Now
There is nothing like dressing up for the night and feeling rather special and elegant with a little bit of make up and a lot of good clothes and jewelry. You can even dress up to play this delightful slots game that has five reels and twenty five paylines. There are also two random progressive jackpots. Both the minor and the major jackpots can be won at any time when playing the real money version of the game and both jackpots increase in value with every real money bet that is placed making the potential to win one of them even more thrilling.

There are two wild symbols in this exciting game both the man and the woman can substitute for other symbols and complete winning paylines as a result. The man appears on reels 1 and 5 and when he is used to complete a winning payline the winnings are doubled. The lady appears on reels 2,3 and 4 where she can also substitute for other symbols and she triples any winnings earned. If the man and the woman appear together and both help make up a winning payline, the winnings for that line are multiplied 6x.

Speed to Free Spins with the Scatter Car Symbol