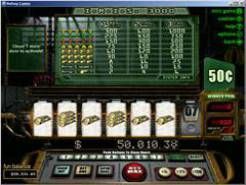 Play Now
This game is not about flowers but rather the IRIS initials stand for Interactive Real Intelligence Slot. This five reel slot that has one payline and a random progressive jackpot seems to be situated inside a nuclear reactor where fear of radiation hazard has players keeping alert and trying to find the right door to win the game. This game can be tried out for fun but it must be noted that the progressive jackpot cannot be won in the fun mode and the player only really gets a full grasp of the game and a full experience when playing the real money game.

In this game players are able to place one, two or three coins per spin. The set size for the coins is $0.50 with a maximum coin bet standing at $1.50. Players will note that the game has 7 doors but it is considered a five reel game. The game is not a traditional slots. Players place their bets and will then note 5 open doors, the player can then swap the open doors for others in the hope that he will enable more matching symbols. It is not as complicated as it sounds and playing this game is actually easy and also fun. The highest payout in the base game is awarded for five of the yellow radioactive reactors appearing on the payline. Five of these award the player 1000 coins, four award these 600 coins and three award players 300 coins. It is quite a reactive game but one that is also rewarding.
Play Now