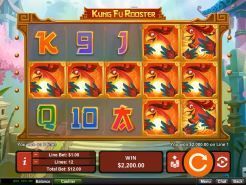 Play Now
Kung Fu Rooster slots focuses on the magical and rewarding powers of the rooster. This rooster is a fighter and a giver and used in Chinese mythology to help warriors find their way and have success in their battles. This game has five reels and twelve paylines. Each spin of the reels is accompanied by twangy music that actually compliments the game and sets the scene well for the rooster and his friends. Players can try out this game for fun and practice before placing real money bets and there is an auto play feature for players that like to preset the number of spins the game runs for consecutively. At any time the player can stop the auto play and continue playing manually.