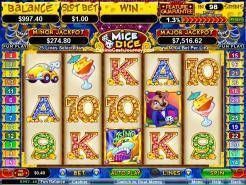 Play Now
They may be small but that does not mean that they are not capable of running a casino and running it well. This can be seen in the Mice Dice slots game where the croupiers are mice and the visitors are also mice. There are many different casino games at the Mice Dice casino but that is not of immediate concern to the player who should be more interested in the main croupier who is also the wild symbol. There are five reels and twenty five paylines in this cute slots game that can also claim two random progressive jackpots. Both the minor and major jackpots can be won at any time when playing the real money version of the game and these jackpots increase in value with every real money bet that is placed.

Mr Mouse is a Substitute and a Trigger for Free Spins

Mr Mouse who is the main croupier of the game is also the wild symbol and he can substitute for any of the other symbols on the screen apart from the scatter casino. Landing on active paylines Mr Mouse awards some fabulous payouts. Five of the Mr Mouse symbols awards the player 2500 coins, four award the player 500 coins, three awards the player 100 coins and two awards the player 10 coins. If two or more of the Mr Mouse appear on the screen the player is treated to a dice roll. The sum of the numbers on the dice is actually the number of free spins that the player receives. With a trigger of two Mr Mouse symbols the player is rewarded with one extra dice roll that can give him a multiplier of up to 6x for the free spins and with three or more Mr Mousse symbols that trigger the free spins the player can win a multiplier of up to 12x that is the sum of two extra dice that are spun. This game includes a feature guarantee that promises the free spins will be triggered within 100 spins and there is also a win win feature that promises players payouts if they do not win enough during the free spins bonus games. The win win is triggered if the player wins less than 10x his triggering bet. With zero winnings the player is promised at least 50x his triggering bet.