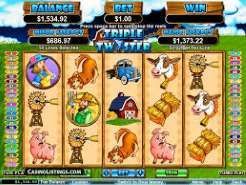 Play Now
Life on the farm is good until a hurricane warning comes along and then all hell breaks loose and the farmer needs to make sure everything is tied down and all his animals are secure. Everyone gets into a frenzy and some of the animals go a bit wild in anticipation of the high winds that preceded the scary tornadoes. Players will feel a bit of this anxious behavior when logging on to the five reel fifty payline slots game that is Triple Twister. This game includes two random progressive jackpots that can be won at any time when playing the real money version of the game and there is an optional auto play for the player that wants to preset the number of spins that the game runs for consecutively.

The deadly twister is the wild symbol and this appears on reel 3 where it expands to cover the whole reel and can substitute for any of the other symbols and in this way help complete a winning payline. When the twister is used in a winning payline, the winnings for that line are tripled giving the player a handsome payout. The weather vane is the scatter and it if offers players a feature game when three and more appear on the screen in addition to multiplying payouts with four and more on the screen. Four of the weather vanes award the player 9x the coin bet placed and five award the player 33x the coin bet placed. The feature game awards the player 9 free spins and during the free spins if the weather vane appears in will replicate itself on one or more reels giving the player more payouts and more winning options. The player can trigger more free spins with the appearance of a further three weather vanes.

Triple Twister Slots is a special game in many ways and especially in the fact that it offers players a win win feature. Players that do not win anything during the feature game are guaranteed at least 100x the coin bet placed in the win win feature. if the player wins between 0-2x his bet he is guaranteed an 8x win and between 2x-5x the bet the player gets 3x his win and a win of 5-10x the bet the player doubles his winnings. Everyone is a winner in this game that prepares not just the farmers but also the players for stormy seasons.
Play Now