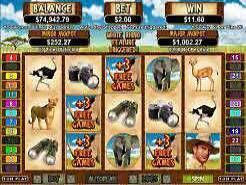 Play Now
Africa is a continent of beauty filled with fantastic people and gorgeous scenery but most of all it is the animals that draw visitors and explorers to this land where they can find the Big Five alongside many other extraordinary African animals. White Rhino touches on the lives of one guide that likes to take people around the African jungles where they can see many different rare and beautiful animals including the very special and unique White Rhino. This game has five reels and twenty five paylines, there is an auto play option for players that like to preset the number of spins the game runs for consecutively and there are two random progressive jackpots that can be won at any time when playing the real money version of the game. Both these jackpots, the minor and the major, increase in value with every real money bet that is placed.

The Wild Yet Calm White Rhino

This game makes use of the animals and the important places in Africa as its main symbols. The White Rhino is the wild symbol and it appears only on reels 2, 3 and 4. When the White Rhino does appear on these reels it substitutes for other symbols and in this way completes winning paylines. If this wild appears on all three reels at once the player is treated to an initial three free spins and additional free spins based on the number of Rhinos that appear on the screen.