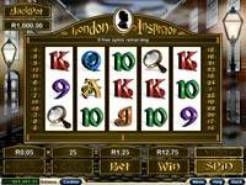 Play Now
With hints of Sherlock Holmes and unsolved crimes, this five reel twenty five payline slots game is a tribute to London in the 1920's through to the 1950's when policemen were known as Bobbies and crime was rife in the streets with many cases unsolved. Luckily clever people like the famous Sherlock Holmes were able to sort through the clues and solve some of the mysterious crimes. This slots game touches on just some of the crimes and investigations that occurred during those times.