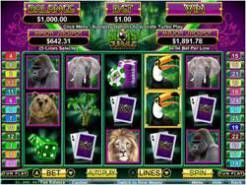 Play Now
Jungles have always been popular places to visit and definitely to explore in casino games. The Slots Jungle game is no exception it is filled with colorful creatures, plants and exciting symbols that contribute to the game. There are five reels and twenty five paylines in this game that includes a chance to win free spins and three separate bonus games. Players may try out the game for fun before placing real money bets and when comfortable enough it is very easy to switch the game to a real money option. There is also an auto play for players that want to preset the number of reels the game runs for consecutively. All the options in the game and the betting units offered are clearly detailed.

The hippo is wild and he can substitute for other symbols and complete a winning payline in this way. On his own the hippo awards players some very high payouts, five in a row on an active payline awards the player 450x the coin bet placed. One or more of the toucans on screen activates the toucan bonus game. In this game the player has to guide the toucans through trees and catch them before his time is up. The bonus payouts he receives are based on the speed and number of toucans that he catches. Two and more of the monkeys triggers the monkey bonus game. This game is similar to the toucan bonus game. Players have a certain amount of time in which to catch as many monkeys as possible that are hiding among the trees. A third bonus game is triggered when two and more briefcases appear on the screen, in this case players are taken to a new screen where they have to pick a briefcase. Each briefcase offers payouts of 100-1000 coins. And the final bonus game is the free spins option. This is triggered when two and more of the golden eggs appear on the screen. The player can win up to 30 free spins depending on the number of eggs that trigger the bonus game. The jungle has become a very interesting option with so many excellent bonus games and payouts.
Play Now