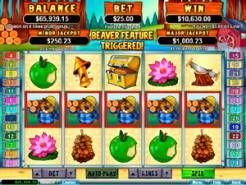 Play Now
The Builder Beaver pulls logs along and clears the forest in order to build his homestead, he does this methodically and with care and patience and always a smile on his face. The Builder Beaver slots game visits this little enterprise where players can enjoy an action packed slots game that has five reels and twenty five paylines. There are two random progressive jackpots included in the game that can be won at any time when playing the real money version of the game. Both the minor and the major jackpots increase in value with every real money bet that is placed and give the players more incentives to enjoy the game and hope for winnings.

A Very Industrious Beaver that Benefits the Player