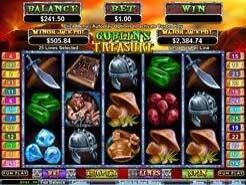 Play Now
Set on a dark background with some sinister looking goblins and symbols this slots game is one of the most exciting and rewarding games that is available today. There are two random progressive jackpots that can be won at any time when playing the real money version of the game and there are two wilds and a special scatter symbol that multiplies winnings. Players may try out this game in the fun mode before placing real money bets and this is the best way to enjoy the game before the Adrenalin of real money wins kicks in. The game has five reels and twenty five paylines.

Two Wilds and Lots of Free Spins with Goblin Multipliers

The goblin symbol and the treasure chest symbol are both considered wilds that substitute for other symbols and complete winning paylines adding to the potential payouts. The goblin symbol only appears on reel 1 and in the picture there can be 1-5 goblins. The number of goblins in the picture is directly equal to the multiplier for this symbol when it completes a winning payline. When the goblins appear on reel 1 and the treasure chest appears on reel 5 at the same time the player is treated to 15 free spins. The multiplier for the free spins is according to the number of goblins that appear in the triggering symbol. Five more free spins can be triggered with the appearance of the goblin on 1 and the treasure chest on 5. There is also a win win feature that is applied at the end of the winning spin if the player has not won enough. If the player has not won anything he can win up to 1000x his coin bet placed in the win win feature.

Apart from the wilds and all that they offer in this game there is also a scatter symbol. The scatter symbol is the goblin castle, this despite its dark shadows awards players multiplying payouts of up to 200x the coin bet placed. When playing this game it must be remembered that players can also win either the minor or the major random progressive jackpots at any time during the free spins or the base game.
Play Now